On My Way to Parent-Teacher Conferences: Recalculating 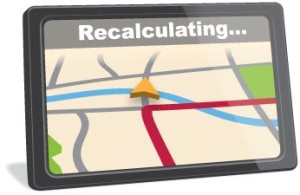 Parent-Teacher conferences are coming up for many schools. Judy Hutchinson is a Family Consumer Specialist with the Illinois Department of Human Services (DHS), Division of Mental Health (DMH) Child & Adolescent Services who has been a guest blogger for One Voice Illinois before. Today she shares a personal tale about the importance of parents and teachers communicating effectively for the benefit of their students.

Several years ago my husband and I headed off for a weekend in Nashville. My husband’s work day began very early, so by Friday night, he was willing to hunker down in the passenger seat and let me drive. “I’ll get you there,” I assured him as he stretched his legs and yawned.

“There” is the operational word in my assurance to him. I knew we were headed for Nashville, and we had been there before. I certainly didn’t need the GPS. The problem was even though I knew we were headed for Nashville, my mind’s eye envisioned Louisville. The trip was relaxing with me musing and my husband dozing until we approached the Ohio River and were greeted with, “Welcome to Floyds Knobs.” My musings went to “Ugh!” because I know Floyds Knobs announces the outskirts of Louisville. My dozing husband roused with suspicion. “What’s wrong now?” he asked. (Full disclosure: This isn’t my first rodeo fiasco.)

“Don’t worry,” I assured him. “I’ll get us there, but while I know we’re really going to Nashville, I’ve driven to Louisville.” I could tell you he was surprised, but he really wasn’t. Nashville and Louisville are both great weekend getaway spots; however, you can’t see where Louisville Slugger baseball bats are made in Nashville, and you can’t attend the Grand Ole Opry in Louisville.

It all worked out in the long run. Three hours and few calculated recalculations later, we were in Nashville. Funny, but the memory of this travel faux pas resurfaced during recent Parent-Teacher conferences. We’re raising my grandson who has a hearing impairment and ADHD. His study habits are still developing. It is sometimes difficult to know if he didn’t hear the assignment accurately, didn’t organize it and hand it in properly, or simply chose not to do it. Do I hear an “Amen” from the parents of students with ADHD?

This particular assignment was for students to research a topic, write an outline, PowerPoint slides, and an interactive activity. Once the teacher approved these elements, the student would make the presentation to the class. Every day after school, I asked, “Have you received feedback on your presentation?” Everyday my grandson shook his head, “No.” Then it was Floyds Knobs all over again. I asked the question, but he answered, “They’re all done.”

“Did you raise your hand to let him know you hadn’t presented?” I asked.

I took a couple of days to consider my appropriate level of involvement. This gave me enough time to make a few assumptions as to why my grandson wasn’t called on to present. “He’s being kind,” I thought. “The teacher knows how anxious my grandson must have been to present in front of the class when he knows his hearing impairment also affects his speech.” That wasn’t it. I addressed my concerns in an e-mail to the teacher, and watched my Inbox for the response. It came quickly.

“He didn’t pay attention to the other students,” the teacher told me. “I asked if there were any other presentations, and he didn’t even respond because he wasn’t paying attention then either.”

The experience left me less-than-eager for the upcoming Parent-Teacher conference, but I mustered a smile, threw out my hand, and introduced myself. He shook my hand and answered, “He has a B.” My introduction and his response didn’t seem to match. Once again, I had headed out for Nashville, but navigated to Louisville. You see, the teacher thought all along that my priority was the letter grade. Why would I ask questions if my student was working at B level?

My priority at the first of the year was building success quickly. There had been times when the grades were very important to me; not because I’m focused on grades, but because I knew my grandson needed to experience success as a payoff for the hard work we were expecting from him. Once he had a taste of success, I could use that confidence and competence to develop effective study habits. If we weren’t constantly at risk of failing the class, I could allow him to begin to take the reins and even experience an occasional character-building failure.

I did tell the teacher. I told him we were now building a work ethic in our grandson. I told him it was important that he complete the assignments as independently as possible, but sometimes he would need support. He told me the presentation could still be given—to another teacher in a resource room. He told me what he would tolerate in the way of behaviors, and I told him my husband and I would work with him to meet those expectations. I told him this is a process, and we wouldn’t always get it right. He told me he would send an e-mail from time to time to keep us informed of progress.

Life is messy. It’s uncomfortable to admit that we don’t have it all together. Every once in a while, we lose our way. We start out with good intentions, but stop short of our destination. We make one goal our destination, yet when we reach it, we fail to communicate the next destination. If we as parents can’t admit that sometimes we aim for Nashville, but drive to Louisville, how can we expect our students to raise their hands and say, “Hey, I need help!” Let’s admit it: from time to time, we all do.