Painting Outside the Lines 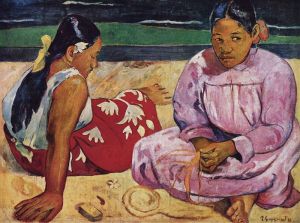 Welcome to our 48th year of PTA Reflections! I want to briefly introduce myself. I have been involved in the Reflections program for the last 9 years, first as a local Reflection’s Chair and then as Southern Region Chair. I am excited to serve as the Illinois PTA Cultural Arts Director. Since 1969, the National PTA Reflections program has encouraged students in preschool through high school from across the nation to challenge their creativity and submit works of art in the areas of dance choreography, film production, literature, music composition, photography, and the visual arts.

A few weeks ago, my family and I traveled north to Chicago for a quick weekend get-away. One of our favorite spots in the city is the Art Institute. My daughter, sister, and I spent Saturday morning (and a good part of the afternoon) wandering through the many galleries of the museum’s main traveling exhibition, “Gauguin: Artist as Alchemist.”

Of course, I was familiar with Gauguin’s impressionist paintings from my college Art Appreciation class. He was the guy who went to Tahiti at the end of the 19th century and brought island exoticism into the prim world of still lives and fruit. However, what I learned was there’s a lot more to Paul Gauguin than paintings of Tahitian natives and mangoes.

Did you know that although Gauguin was born in Paris, he spent much of his life outside France? When Gauguin was an infant, his family fled France after the failure of the leftist revolution in 1848 and took refuge in Peru. When he was 17, he joined the merchant marine and later the French navy. He spent six years at sea and circumnavigated the globe twice. It was during this time he honed his extraordinary wood carving skills. Then he settled into the humdrum life of a stockbroker in Paris, marrying a Danish woman, raising five children and painting only on Sundays.

I hate my job. I hate my life. I’m going to Tahiti to paint.

Gauguin did not have formal training at an art school but was lucky enough to befriend a distinguished painter—Camille Pissarro. Pissarro became his mentor both instructing him and helping him meet other Impressionists working in Paris. In his early 30s, Gauguin decided to give up his day job and devote himself completely to painting.

Merriam Webster defines an alchemist as “someone who changes or transforms something in a mysterious or impressive way.” Like an alchemist, Gauguin believed in the artist’s ability to take raw materials and transform them into something entirely new. The exhibit focuses on the vast range of raw materials he used and the many different ways in which he turned them into very beautiful objects. I imagine that you could have given him any raw material, and he would make something beautiful.

In the year of his death (1903, on a French Polynesian island, of course) he said, “It’s precisely an endless kind of art that I’m interested in, rich in all sorts of techniques, suitable for translating all the emotions of nature and humanity.”

Gauguin begged, borrowed and stole to create a unique vision of the world, which is evident in everything from his leaded pottery with colored glazes and unglazed stoneware vases, to decorative walking sticks, a carved wooden barrel, designs for fans and even a small, strange, pearwood sarcophagus with iron hinges.

I heard many visitors express their awe at discovering Gauguin’s skill as a sculptor. I must say I find it strange that sculpture is not something that is necessarily connected to painting. Yes, painting and sculpture and decorative arts are three distinct categories, but what Gauguin was doing was basically blurring all the lines and saying, “Well, art is art.”

And, I agree…art is art.

So, it is in this spirit that we have decided to open up the Reflections visual art category this year to include sculpture submissions. The Reflections program asks our children to get creative, and we believe limiting our children’s visual art submissions to two dimensional art suppresses their imagination and creativity. The world would be a very small place without creativity. Stories, photographs, music, paintings and sculptures, dance, and films about the human condition have the ability to relate to a diverse population and allow us to ask questions of our community and of ourselves. We invite the children of Illinois to participate in Reflections this year and share their thoughts and ideas about the theme “Within Reach.”

If you’ve got questions about how to run a PTA Reflections program at your school, sign up for our PTA Reflections Webinar on Sunday, August 27, at 7:30pm. We’ll cover everything you need to know, including forms, judging, and advancing to higher levels. If you can’t make it, contact Illinois PTA Cultural Arts Director Laura Murphy at lmurphy@illinoispta.org.